A long, long time ago in the 4th dimension there existed a race of beings called "Inhumen" or "God Lords". Watching human from above, Lord of Chronos, one of the God Lords, created three time artifacts named AeternoBlades with the intention of allowing travel between dimensions.

However, their mere existence created a gap between dimensions. Human darkness spread to the God Lords' 4th dimension. God Lords that touched the darkness became Demons. Demons brought calamity to the all dimensions and began the Dimension War.

In the end, all the AeternoBlades were sealed in the far depths of the Everlasting Void, the dimension that exists between human and god dimensions. 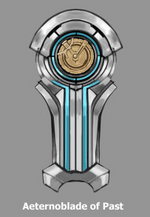 Freyja's AeternoBlade is in the form of sword. It has decent power, range, speed, and comes with the ability to reverse time. 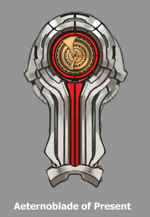 Bernard's AeternoBlade is in the form of a halberd. It has more power than the sword but less speed. 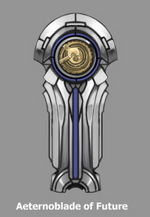 Felix's AeternoBlade is in the form of a whip blade. It has less power than the others but has the benefit of high speed.

Community content is available under CC-BY-SA unless otherwise noted.